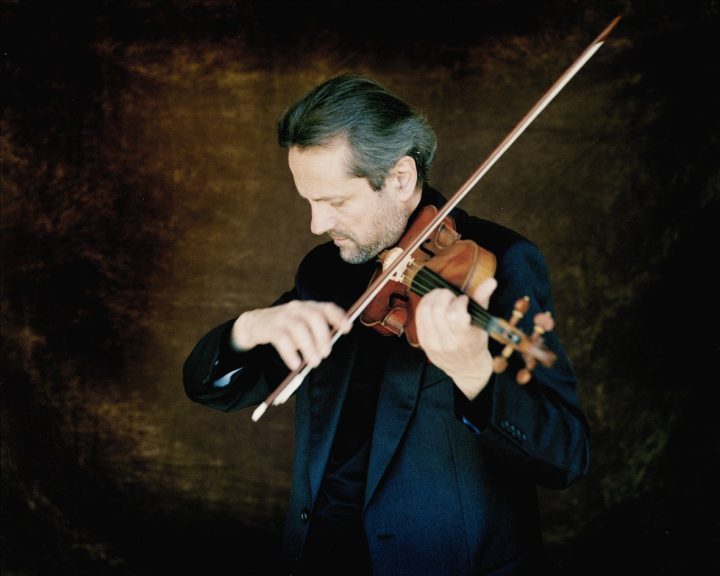 Born in Treviso, where the Vivaldi renaissance started 50 years ago, Giuliano Carmignola began his violin studies with his father. His first teacher at the Venice Conservatory, Luigi Ferro, was a soloist with the Scuola Veneziana Orchestra (created in 1947 by Angelo Ephrikian to perform Vivaldi’s music) and later played with the Virtuosi di Roma, with whom Carmignola was in turn to appear as a soloist from 1970 to 1978, while succeeding Ferro as a teacher in Venice. Carmignola’s career was launched at the beginning of the 1970s with his successes in national and international competitions. Having attended master classes with Nathan Milstein, Franco Gulli and Henryk Szeryng, he went on to perform the major violin works of the 19th and 20th centuries under conductors of the stature of Claudio Abbado, Eliahu Inbal, Peter Maag and Giuseppe Sinopoli, in-cluding giving the Italian premiere of Henri Dutilleux’s Violin Concerto.

As a teacher, Carmignola has been on the staff of the Musikhochschule in Lucerne and the Accade-mia Musicale Chigiana in Siena. His distinctions include the title of Accademico of the Reale Acca-demia Filarmonica in Bologna and the Accademia di Santa Cecilia in Rome. Giuliano Carmignola plays the “Baillot” Stradivari (1732), presented to him by the Fondazione Cassa di Risparmio in Bologna for his artistic achievements and his commitment to that city’s Orchestra Mozart.

2003 Leads the Academy of Ancient Music on a European tour, is soloist with the Basle Chamber Orchestra, and makes his debut at the Boston Early Music Festival. This year Carmignola becomes an ex¬clusive artist of Deutsche Grammophon/Archiv Pro-duktion

2004 In Bologna, Carmignola and Claudio Abbado begin a three-year series of Mozart con-certos to be given throughout Europe with the Orchestra Mozart; other engagements include performances with Les Violons du Roy, the Lausanne Chamber Orchestra (under Ton Koopman), the Mahler Chamber Orchestra, and a highly acclaimed US tour with the Venice Baroque Orchestra (VBO), featuring Vivaldi for the inaugural season at Walt Disney Hall in Los Angeles

2006 Carmignola plays much Mozart with Abbado and the Orchestra Mozart in Italy and Salzburg. Mozart is also prominent in his concerts with the Academy of Ancient Mu-sic in Belgium, Great Britain and on tour in the US. He appears with Marcon and the VBO in Germany, Spain and Austria (including the Vienna Musikverein together with violinist Viktoria Mullova). His world-premiere recording of five unknown Vi-valdi violin concertos with Marcon and the Venice Baroque Orchestra is released with great success

2007 The year opens with performances of Beethoven’s Violin Concerto with the Basle Chamber Orchestra in Switzerland, Austria and Germany, followed by a recital tour in Japan. Carmignola and the VBO under Marcon tour the USA and South America, and also appear in Germany and France. Mozart with the Royal Scottish National Or-chestra under Roberto Abbado. Bach’s Brandenburg Concertos with the Orchestra Mozart under Claudio Abbado on a tour of Italy, and Bach, Vivaldi and Locatelli with the Academy of Ancient Music on UK tour. Appearances with the Tonkünstler Or-chestra in Austria. Festival appearances include the Musikfest Bremen with the VBO and Marcon performing Vivaldi, and the Lucerne Festival with The Matteis Project Ensemble performing Matteis’s A clear view of heaven

2008 Appearances with the VBO and Marcon in Switzerland and at the Rheingau Music Festival. Concerts with the VBO in France, Germany and on tour in Japan and South Korea, with the Orchestra Mozart and Claudio Abbado in Italy, the Orchestra della Toscana in Italy, and the Academy of Ancient Music in Germany and Britain (includ-ing London’s Wigmore Hall). Releases this year include Mozart’s Violin Concertos and the Sinfonia Concertante (with violist Danusha Waśkiewicz) with the Orchestra Mozart under Claudio Abbado and Vivaldi Concertos for two violins in which Car-mignola is partnered by Viktoria Mullova and the VBO conducted by Andrea Marcon

2009 Vivaldi concertos with the VBO in the USA, France, Germany and Switzerland; Mo-zart with the Orchestre des Champs-Élysées in Munich, France and the Baltic coun-tries; Mendelssohn with the Basle Chamber Orchestra under Paul McCreesh; Tartini with the Royal Concertgebouw Orchestra under Giovanni Antonini; performances with the Orchestra Mozart in Italy; Mozart sonatas with pianist Robert Levin at the Salzburg Mozart Week; recital tour with Viktoria Mullova in Italy; numerous other concerts and recitals in France, Germany, Italy and Spain. Released this year: Con-certo Italiano with the VBO conducted by Andrea Marcon, featuring works by Vivaldi and others; Pergolesi’s Violin Concerto with Claudio Abbado and Orchestra Mozart (Record Academy Prize, Tokyo, 2009)

2010 This year sees Carmignola in concert with the Academy of Ancient Music in the UK (including the Wigmore Hall); with the VBO on tour in Switzerland, the USA, Japan and Korea; with Orchestra Mozart and Claudio Abbado in Italy; with Sonatori de la Gioiosa Marca in Austria, Luxembourg and Spain; with the Netherlands Radio Chamber Philharmonic under Frans Brüggen at the Amsterdam Concertgebouw, and with the Bremen Philharmonic under Marcon in Bremen. He also plays Baroque sona-tas at the Salzburg Whitsun Festival and gives recitals with pianist Yasuyo Yano in Paris, Italy, Germany, Japan and at the Menuhin Festival in Switzerland

2011 Haydn and Mozart with the Orchestre des Champs-Élysées on tour of France and with the Zurich Chamber Orchestra; Mozart with the Basle Chamber Orchestra under Um-berto Benedetti Michelangeli; Mendelssohn and Schubert at the Seville Festival; Vi-valdi and Tartini with the Orchestre National de Lyon under Ottavio Dantone; con-certs with the Venice Baroque Orchestra on US tour and in Germany, Italy, France, Switzerland and Romania; Mozart sonatas with Kristian Bezuidenhout at the Vienna Konzerthaus; recitals with pianist Riccardo Doni