Was born in Moscow and  began to do music in from the age of 5. In 1999 she won at the competition Bravo Bravissimo (1st prize Italy, Cremona). A flute was donated to her by V. Spivakov in 2000. In 2004 she won the Young Musicians Competition of Moscow (1 prize) and became the Laureate of the All-Russian Competition Classic Heritage (2nd prize). In 2009 she graduated from the Moscow State Conservatory named after P.I. Tchaikovsky class of O. V. KHUDYAKOV. Since 2008 she is an artist of the Orchestra MUSICA VIVA conducted by A. Rudin. She took part in master classes of A. Adorian and J. Ferandis. She is a scholar of the  such Foundations as  “New Names” and the Spivakov Foundation. Malika collaborated with such conductors as A. Rudin, M Pletnev, V. Jurowski, T. Currentzis, Yu. Bashmet, A. Vedernikov, V. Spivakov, Sir Roger Norrington, Hansjörg Albrecht, P. Kogan, I. Marin, In 2014 she presented a master class at the Tashkent Conservatory. She was a participant of the December nights festival, Noble Seasons, Double Cane, Eliso Virsaladze Music Festival in Telavi, the festival La Folle Journee. As a guest musician she played in such groups as RNO, GASO, NFOR, NEW RUSSIA.She is a permanent guest soloist at the State Philharmonic Orchestra of Armenia under the direction of Eduard Topchyan. She collaborated with the Academy of Early Music under the direction of Tatiana Grindenko.
Malika participated in projects with the Studio for New Music ensemble. In 2020, Michel Petrosyan, a French-Armenian composer of classical music, dedicated a duet for flute and bassoon “Sabr Sahro” to Malika Mukhitdinova and Andrei Shamidanov. She has toured in countries such as Japan, France, Switzerland, Spain, Italy, China, Georgia, Armenia, Uzbekistan, Germany, Estonia, Austria, UAE, Ukraine. She has active concert activities, takes part in various international and Russian festivals. 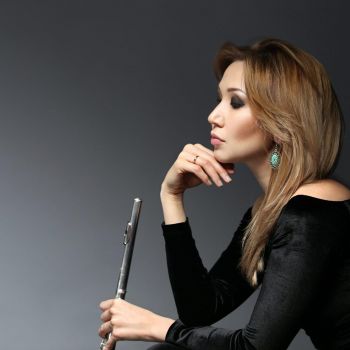