Aylen Pritchin is one of the most interesting and versatile Russian violinists of his generation. As Bruno Monsaingeon said the young artist is “obviously gifted with something special to say and with an outstanding musical culture”.

In the season 2018-2019 Aylen Pritchin reunites with Teodor Currentzis and the MusicAeterna orchestra to perform Tchaikovsky's Violin concerto on tour in Russia and comes back as a guest soloist to the Svetlanov Symphony Orchestra with Korngold’s Violin concerto in Moscow. As a soloist he is also engaged to make his debut with Transilvania Philharmonic Orchestra in Cluj (Romania) and Cannes Symphony Orchestra in France. In April 2019 Aylen Pritchin is going to make his recital debut in Canada together with his duo partner Lukas Geniusas.

The engagements of the previous 2017-2018 season include many performances as a soloist with orchestra as well as a chamber musician. Among the events of the season there were performances of Prokofiev’s 1st violin concerto with Teodor Currentzis in Moscow (Russia), Schubert’s String quintet with David Geringas in Rellingen (Germany), both violin and viola parts in Schönberg's Pierrot lunaire with Teodor Currentzis and Alexander Melnikov among others. Also Aylen Pritchin appeared as a guest-soloist with Bruch‘s G minor concerto in Durango (Mexico) and made his debut with the Russian National Philharmonic Orchestra in Moscow and Mariinsky Theatre Orchestra in St.Petersburg (Russia).

In December 2017 the Russian label „Melodiya“ has published the third album of Aylen Pritchin with Prokofiev´s works for violin and piano recorded together with Yury Favorin. Other two CDs include Russian music for violin (Tchaikovsky, Stravinsky, Desyatnikov) and works for piano trio with Lukas Geniusas and Alexander Buzlov.

As result of his great interest for the less known music Aylen Pritchin’s large repertoire includes such works like violin concertos by Schnittke and Martinu or violin sonatas by Antheil and Feinberg. In 2017 the musician took part in world premieres of works by Klaus Lang, Arman Gushchyan and Sergey Akhunov. 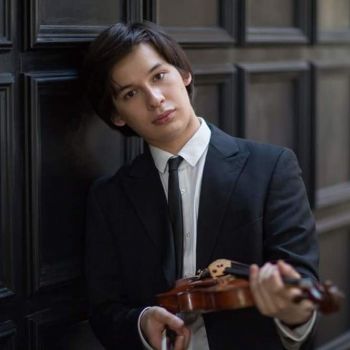