The voice is our first instrument, so it’s not uncommon for violinists and conductors to find inspiration in a vocalist’s turn of phrase. Likewise, many vocalists harness a certain instrumental virtuosity in their performances. But to find a musician who can seamlessly blend all three together? That is unheard of — unless you’ve heard of Dmitry Sinkovsky.

The charismatic and atypical musician Dmitry Sinkovsky expresses his art through a rare combination of three different aspects: as a violinist, as a conductor and as a countertenor. In his many musical appearances, Sinkovsky effectively reflects one of the main ideas of the Baroque period: using the instrument as if it were the voice of a singer and using the voice as if it were a perfect instrument.

Dmitry Sinkovsky was groomed for an international career by the Moscow Conservatory, where he studied violin with Alexander Kirov, and at the Zagreb Music Academy in Croatia where he studied conducting with Tomislav Facini. While a student in Moscow, Sinkovsky’s curiosity led him to earlier repertoire. As a member of the chamber ensemble Musica Petropolitana, he met Baroque violinist and Early Music pioneer Maria Leonhardt, who convinced him to change his course and concentrate on historical performance practice.

He has since taken innumerable prizes in major competitions from the Premio Bonporti in Italy (2005) to the Bach Competition in Leipzig (2006), the Musica Antiqua Competition in Bruges (first prize, audience prize and critics’ prize, 2008) to the Romanus Weichlein prize at the Biber competition in Austria in 2009 for his ‘extraordinary interpretation of Biber’s Rosary Sonatas’ and first prize at the Telemann Competition in Magdeburg (2011). As a laureate of the Jumpstart Jr. Competition in the Netherlands, Dmitry Sinkovsky has been loaned a superb violin by Francesco Ruggeri (1675).

Critics and audiences alike praise his ability to “play from the heart” while interpreting with ease music of dazzling difficulty. Though he spends much time with Baroque repertoire and emphasizes it in his career Dmitry maintains his profile as a classical violinist performing a large range of music written for this instrument and breaking boarders between the Baroque and Modern worlds. Among his partners are Alexei Lubimov, Alexander Rudin, Theodor Currentzis, Martina Filjak, Andreas Scholl, Christoph Coin, Luca Pianca, Aapo Häkkinen and Skip Sempe. 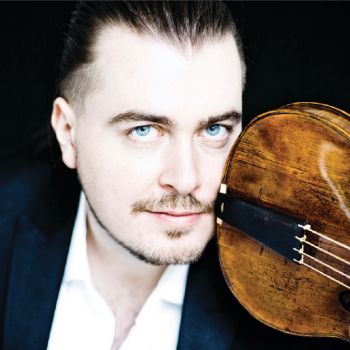