Kerstin Feltz, born in Jena, Germany, received her first cello lessons at the age of five. After attending the specialist music school in Weimar, where she was a pupil of Lieselotte Pieper, she proceeded to study at the Franz Liszt Conservatoire in Weimar.

For her postgraduate studies she attended the Moscow Tchaikovsky Conservatoire under the tutelage of Valentin Fejgin, whose assistant she became from 1985 until 1987. During this time she also received significant impulses for her further artistic development from Erkki Rautio, Ivan Monighetti, Heinrich Schiff, Boris Pergamenschikov and others. Since then Kerstin Feltz has performed throughout Europe and the USA, as well as in Mexico, Cyprus, China, Japan,Turkey and Brazil. In well-received recitals and in concerts with renowned orchestras she has fascinated her audience again and again with her outstanding charisma and dedication to music.

Numerous awards testify to her stature as an exceptional cellist: she received the gold medal at the 6th International Johann Sebastian Bach Competition in Leipzig at the age of eighteen; she won prizes at the International Cello Competitions in Markneukirchen in 1979 and in Belgrade in 1984, at the Pablo Casals Competition in Budapest in 1985, and at the International Tchaikovsky Competition in Moscow in 1986. Besides a large number of radio and TV recordings, Kerstin Feltz has produced several CDs in recent years, which have been received with great enthusiasm by the listeners: solo works by Kodaly, Reger and Ysaye, chamber music with piano by Schumann, Franck, Strauss, Mendelssohn, Schubert and others, as well as the complete suites for unaccompanied cello by Johann Sebastian Bach. A CD of her performing with the Vogtland Philharmonic Orchestra Greiz/Reichenbach under the head conductor Doron Salomon also is available.

At the beginning of the academic year 1994/95 Kerstin Feltz was appointed Professor for Cello at the University of Music and Dramatic Arts in Graz, Austria. During the last 20 years she passed on her experiences to lots of young cellists from all over the world and gave masterclasses in Poland, Greece, China and Brazil.

She is playing a cello made around 1700 by the Milanese violinmaker Giovanni Grancino. In the year 2000 it underwent thorough restoration by the Stuttgart violinmaker Hieronymus Köstler.

Since 2002 Kerstin Feltz is working together with the young Hungarian pianist Zoltán Füzesséry, giving numerous successful concerts in Germany, Austria, Russia and Turkey. 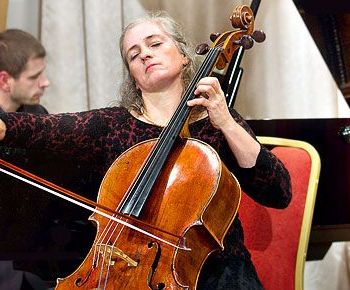