Was born in 1984 in Moscow. He graduated from Moscow State Tchaikovsky Conservatory, majoring in Choral conducting (2008, class of prof. Stanislav Kalinin) and opera/symphonic conducting (2010, Class of prof. Valery Polyansky). In 2008, he became a prizewinner at The National Russian Conductor Competition.

In 2008 – 2011 He was the artistic director and conductor of the Gnessin State Music college choir, where he also taught conducting. He founded his own ensemble, Questa Musica, in 2008, undertaking a number of significant concert projects in Russia and abroad. After receiving a lecturer’s position at Moscow Conservatory in 2011, Chizhevsky became a conductor of the State Academic Symphonic Capella of Russia.

In September 2012 he undertook the premiere of the opera Franziskus at the Bolshoi Theatre –written by Sergej Newski, one of Russia’s leading contemporary composers. He also premiered Michael Nyman’s Prologue to Dido and Aeneas by Henry Purcell with the State Academic Symphony Orchestra in Perm (October 2012).

In 2013 he was leading Questa Musica in a production of Igor Stravinsky’s The Soldier’s Tale with choreographer Oleg Glushkov. Since 2014 he has been conducting at the Bolshoi Theatre in Moscow, where he directed the 1st Baroque music festival (2014-15 season). In the same year he undertook a production of Mozart’s «Così fan tutte» at the Buryat State Academic Opera and Ballet Theatre in Ulan-Ude, directed by Hans-Joachim Frey.

In June 2015 he and a theatre director Boris Yukhananov co-created «The Drillalians» - a six-part opera cycle, defined as a ground-breaking «opera series», which included world premieres of operas by a plethora of leading composers of contemporary Russia: Dmitry Kurlyandsky, Boris Filanovsky, Alexej Syumak, Sergej Nevsky, Alexej Sysoev and Vladimir Rannev.

Since 2016 Chizhevsky has been collaborating with the Tokyo-based Tokyo New City Orchestra.

In February 2016 he and Questa Musica took part in the Baroque music festival in Linz (Austria). In collaboration with the violinist Roman Mints he made a recording of Leonid Desyatnikov’s compositions: «The Sketches to Sunset» and «The Russian Seasons». Chizhevsky is the artistic director of the II International Orthodox Chant festival «The Enlightener» on Valaam island on Lake Ladoga. At the same time, plays a significant role in promoting contemporary music in Russia, performing the Russian premiere of Karlheinz Stockhausen’s «Gruppen» in collaboration with conductors Vladimir Yurovsky and Fuad Irbrahimov at «Another Space» - Moscow's most significant Contemporary music Festival. 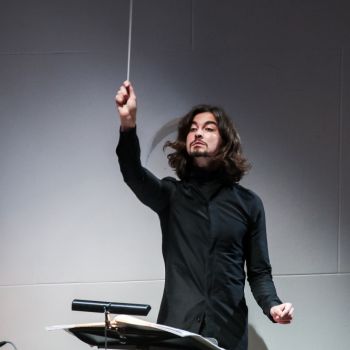