The press has already taken her to their heart: “fulminant, brilliant, beautiful voice” (Das Opernglas), “a touching mezzo” (Süddeutsche Zeitung), “…a treat for the ears and the eyes…” (WAZ). The young mezzo-soprano Lena Belkina is already in demand all over the world.

The 2017 summer season saw her debuting in Carmen at the Bregenz Lake Festival, a role in which she will be back in 2018. Bevor that, she gave a Belcanto Recital at the Bad Kissinger Summer 2017. The upcoming season 2017/18 includes her appearance at the Grand Théatre de Genève in Rossini’s Barbiere di Siviglia, after that Lena will be travelling to Brussels for concerts of Tancredi/Rossini. Spring starts for her as Nicklausse in Les contes d’Hoffmann, returning to the New National Theatre of Tokyo, where she had already been successful as Rosina. Lausanne Opera will welcome her as Elena in a new production of La donna del lago. In the same role, she will appear at the Maifestspiele Wiesbaden. This season’s concert engagments include Medelsohn’s Walpurgisnacht in Bratislava and Mozart’s Missa in c-Minor in Munich.

Lena Belkina sang her way into the international limelight with her Angelina in Rossini’s La Cenerentola (Carlo Verdone/Gianluigi Gelmetti). The live video recording made by Mondovision was awarded the 64º PRIX ITALIA and the Warsaw Music Gardens Festival audience prize. What entranced the Oscar-winning director about his star performer was her extraordinary charisma: “…una fotogenia straordinaria, e la giusta dolcezza malinconica e sognante nei suoi grandi occhi neri…” (“extraordinarily photogenic, with the ideal melancholy and the dreamy sweetness of her big dark eyes”) (Verdone in Cultura). Since then, this film version produced by Andrea Andermann has been shown in more than 150 countries.

The Ukrainian singer was engaged by the Rossini Opera Festival for the major role of Arsace in a newly revised edition of the opera Aureliano in Palmira. It was the first performance of the opera at the festival and was directed by Mario Martone.

Special attention was paid to Lena in the Mikhaylovsky Theatre in St Petersburg, where she sang, under the direction of Mikhail Tatarnikov, the Polina/Milovzor part together with Elena Obraztsova as countess in Pique Dame.

Meanwhile, the young Mezzosoprano has produced two recordings with SONY Music: after her highly acclaimed Debut-Album DOLCI MOMENTI featuring Belcanto-Arias by Rossini, Bellini and Donizetti with Alessandro de Marchi, the new Album CLASSIC VIENNA with works by Mozart, Gluck and Haydn accompanied by the ORF Symphonic Orchestra under Maestro Andrea Sanguineti was released in summer 2017.

Lena Belkina was born in 1987 and started collecting stage experience in her home town Dzhankoi on the Crimean Peninsula when she was a child. Inspired by the performances of the magnificent Maria Callas, she enjoyed taking singing lessons when she was only 14 and completed her piano studies at the music school with distinction. From 2003 to 2006, the aspiring singer studied at the Glier Music Institute in Kiev in the class of Nikolai Gorbatov and than to 2009 at the Tchaikovsky National Music Academy under Professor Eugenia Miroshnichenko. After winning the most important singing contest of the Ukraine, the B. Gmyria, she succeeded in joining the Leipzig Opera. In 2010, she sang the Elmira part in Floridante and the opening concert of the Handel Festival in Halle. Furthermore, she sang the Etelia part in Meyerbeer’s opera Emma di Resburgo in the Vienna Concert House.

The diploma with distinction in the class of Professor Roland Schubert at the University of Music and Theatre “Felix Mendelssohn Bartholdy” Leipzig followed in 2012. 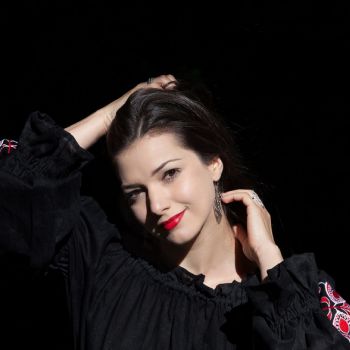