Nikolay Lugansky was born in 1972 in Moscow. He was studying at Central Music School at Moscow Conservatory under Tatiana Kestner and later on with such professors as Tatiana Nikolayeva and Sergey Dorensky. He continued his postgraduate education under Dorensky supervision. The initial stage of his career as the solo pianist brought him the title of the laureate of the I All-Union competition of young musicians in Tbilisi (1988), VIII International competition of J.S. Bach in Leipzig (1988), All-Union competition of S.V. Rachmaninoff in Moscow (1990), International summer academy Mozarteum (Salzburg, 1992) and the win at the Tchaikovsky Competition in 1994. In 2013, Nikolay Lugansky was awarded the title of the “Honored artist of the Russian Federation”. Today on the count of the soloist of the Moscow Philharmonic and honored member the Russian Academy of arts there are many brilliant artistic achievements. They include collaboration with the best symphonic orchestras of Russia, France, Germany, Japan, Netherlands, and the USA and of many other countries under the direction of well-known conductors as Evgeny Svetlanov, Yuri Temirkanov, Gennady Rozhdestvensky, Valery Gergiev, Vladimir Fedoseyev, Mikhail Pletnev, Vladimir Spivakov, Vladimir Jurowski, Yuri Simonov, Alexander Vedernikov, Kirill Petrenko, Kurt Masur, Charles Dutoit, Leonard Slatkin, Kent Nagano, Marik Janowski, Gianandrea Noseda and Sakari Oramo. Besides Lugansky`s partners in chamber performances were pianists Vadim Rudenko, Yuja Wang, violinists Vadim Repin, Leonidas Kavakos, Isabelle Faust, Sergey Krylov, cellists Aleksander Knyazev, Aleksander Rudin, Misha Maisky, clarinetist Evgeny Petrov and soprano Anna Netrebko. Nikolay Lugansky has got a round of applause in the Great Halls of Moscow Conservatory and St.Petersburg Philharmonic, Concert Hall of P.I.Tchaikovsky, Concertgebouw (Amsterdam), Theatre des Champs Elysees (Paris), Mozarteum (Salzburg), The Auditorium Parco della Musica (Rome), Great Hall of Berlin Philharmonic, Carnegie Hall (New York), Suntory Hall (Tokyo), Wigmor Hall and Royal Albert Hall (London), Konzerthaus and Musikverein (Vienna) and many other famous halls of the world.

Lugansky is a constant participant of festivals in Roque-d’Anthéron, Colmar, Montpellier and Nantes (France), Ruhr and Schleswig-Holstein (Germany), Verbier and Gstaad (Switzerland) and “December evenings” in Moscow.

The pianist’s repertoire includes more than 50 piano concerts, works of different styles and epochs: from Bach to contemporary music. The performance of Chopin’s compositions by Nikolay Lugansky, which deserved comparison with the interpretations of the great Alfred Corto, was especially recognized.

Since 1998, the pianist has been giving lectures as the professor at the Moscow Conservatory at the department of special piano. Besides, Nikolay Lugansky still gives hundreds of concerts all over the world annually. In June 2019, Nikolay Lvovich was awarded the State Prize of Russia “for contribution to the development of national and world musical culture”.

The 2018/2019 season was marked by release of the records of Claude Debussy`s compositions for the Harmonia Mundi label, China tour with the National orchestra of France, solo concerts in Moscow, Saint Petersburg, Ekaterinburg, Amsterdam, Budapest, Paris, London, Berlin and performances with Vasily Petrenko in Oslo, Birmingham, with Yuri Temirkanov in Tokyo and Taiwan, with Juanjo Mena in Madrid, with Stéphane Denève in Brussels, Emmanuel Krivine in Paris and with Tugan Sokhiev in Vienna.

For the 2019/2020 season, there are intense tours all around the world from Washington to Seoul. Nikolay Lugansky will give solo concerts in Moscow hall “Zaryadye”, Vienna Konzerthaus, Concertgebouw in Amsterdam, in Luzern and many other significant venues. Among scene partners, there will be the Russian National orchestra under the direction of Mikhail Pletnev, London Philharmonic orchestra and Vladimir Yurovsky, the Honored ensemble of Russia Academic Symphony orchestra of Saint Petersburg Philharmonic and Charles Dutoit, Philharmonic orchestra of Radio France with Mikko Franck and many others. 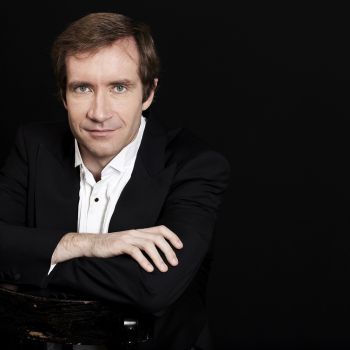