Danish soprano Sine Bundgaard made her professional debut in 2003 at the Royal Danish Opera as Gilda in Verdis Rigoletto. Her international debut was as Zerbinetta in Strauss' Ariadne auf Naxos at Opera municipal de Marseille in 2002. Her German debut at Bayerische Staatsoper in Munich was as Fiakermilli in Strauss' Arabella in 2006. Since then she has enjoyed an extensive international career, both as an opera, concert, oratorio and recital singer and guested at Opera National de Paris, Bayerische Staatsoper in Munich and Drottningholm Slottstheater in Stockholm, aswell as in Marseille, Antwerpen, Nancy, Lausanne, Theatre de Champs-Elysee Opera Comique, teatro delle muse di Ancona, Holland Festival in Amsterdam, Innsbrucker Festwochen der alten Musik and the Danish National Opera.
Her EMI debut-series recording 2005, with orchestra songs by Strauss, Duparc, Berg and Poulenc, was voted Vocal CD of the Year and received raving reviews internationally.
In 2009 she was invited to join the ensemble at the Royal Danish Opera in Copenhagen. Here she developed into a lyric soprano and covers a wide range of the repertoire: Contessa Almaviva, Pamina, Donna Elvira, Juliette, Michaela, Nedda, Nannetta, Lauretta, Lulu, Manon Lescaut (Henze), and Jenny in Weills Mahagonny.
In season 18/19 in Copenhagen she will once again sing Contessa Almaviva in Figaro, followed by her roledebut as Liu in Turandot in a new production by Lorenzo Fioroni conducted by Alexander Vedernikov. In the spring '19 she will make another debut as Fru Ingeborg in the danish nationalopera Drot&Marsk by Peter Heise. This new production will be directed by Kasper Holten and conducted by michael Schønwandt.
As part of the Great Opera Masterpieces series at Tjajkovskij Hall in Moscow she will sing Angelica in vivaldis Orlando Furioso conducted by Federico Maria Sardelli. The season also contains concerts of Brahms requiem and Händel The Messiah.
In 17/18 She made her roledebut as Desdemona in Verdi's Otello conducted by Pier Giorgio Morandi, and sang Silvia di Avila in Thomas Ades' Highly accaimed The exterminating angel in Tom Cairns production.
In 2016/17 she appeared as Juno a.o. in The fairy queen with Concerto Copenhagen and Lars Ulrik Mortensen, Jenny in Mahagonny directed by Graham Vick conducted by Julien Salemkour, and Contessa Almaviva in Figaro.
In 2015/16 she sang Manon Lescaut in Henze's Boulevard solitude in a new production by Lotte de Beer conducted by Jeremie Rhorer and Contessa Almaviva in Mozarts Figaro directed by Elisa Kragerup conducted by Andreas Spering.
She is much in demand as an oratoriosoloist, recently in Bach's H-minor mass, Verdi's Requiem, Dvorak requiem, Dvorak Stabat mater, Handel's Messiah, Mozarts Requiem and Brahms Requiem.
Sine dedicates much time to the Lied-repertoire. In 2016 she created and performed a recital-program with songs to the lyrics of danish poet J.P. Jacobsen set into music by a whole string of composers, mentioning Carl Nielsen, Zemlinsky, Delius just to name a few.
Recently, she has been a returning guest at the international Handelfestival in Karlsruhe. In 2015 as Costanza in Handels Riccardo Primo, sung by Franco Fagioli, in a highly acclaimed production by Benjamin Lazar and in 2017 in the titlerole in the oratorio Theodora.
She was featured on 3 recordings released in 2014/15: Castiglionis Salmo XIX with the Danish Radio Symphony Orchestra and Gianandrea Noseda on Chandos in 2015, the Danish composer John Frandsen's highly acclaimed Requiem with the Danish Radio Symphony Orchestra from 2013 (world premiere) on Dacapo, and Verdi Requiem in a live-recording form 2012 with Per Enevold on Classico.
Recent contemporary roles include the title-role in Bergs Lulu in the Stefan Herheim-production from 2010 for which she received a Reumert-nomination as Singer of the year, The Cheshire cat in Unsuk Chins Alice in wonderland at Bayerische Staatsoper conducted by Kent Nagano(2008) and soprano 2 in Wolfgang Rihm’s highly acclaimed Dionysos at the Holland festival with Pierre Audi and Ingo Metzmacher(2011)
An experienced early music singer, she sang the titlerole in Handels Theodora in 2017 and Costanza in Handel's Riccardo Primo (Franco Fagioli) at the international Handel-festival in 2015, both in Karlsruhe, Angelica in Haydn’s Orlando Paladino with Rene Jacobs at the Edinburgh and Innsbruck festival (2011), Amelite in Rameau’s Zoroastre with Christoff Rousset and Pierre Audi in Stockholm, Amsterdam and Paris (DVD opus Arte)(2009), Drusilla in Monterdi’s Orfeo with McVicar (2008) and Cleonilla in Vivaldi's Ottone in villa with Colonna (2014) both conducted by Lars Ulrik Mortensen.
In concert she sang Mahlers 4th symphony in Birmingham with the CBSO and Manfred Honeck, Carmina Burana in Sala Sao Paulo with OSESP and Antoni Wit, Brahms Requiem with Orchestre de Champs Elysee and Philippe Herreweghe, Carl Nielsens 3rd symphony with Stockholm Symhony orchestra and Tobias Ringborg, Lakme in Queen Elizabeth Hall, London with COG, Songs by Strauss and Grieg in Dvorak Hall, Prague with the Danish Radio Symphony Orchestra and Thomas Dausgaard, Bergs Sieben fruhe Lieder with Arhus Symphony Orchestra and Giancarlo Andretta and Messiah with Marcus Creed and the Danish National Orchestra.
She worked with the conductors Gianandrea Noseda, Jeremie Rhorer, Michael Boder, Julien Salemkour, Carlo Rizzi, Ingo Metsmacher, Rene Jacobs, Phillippe Herreweghe, Kent Nagano, Bertrand de Billy, James Conlon, Pinchas Steinberg, Michael Schønwandt, Enrique Mazzola, Giancarlo Andretta, Matthias Pintscher, Lars Ulrik Mortensen, Andreas Spering, Christophe Rousset, Manfred honeck, Theodor Guschlbauer, Peter Schneider, Thomas Dausgaard, Thomas Søndergaard, Antoni Wit, Rolf Gupta, Alexander Shelley and Tobias Ringborg.
In 2004 she was Artist of the year for Danish National Radio. She received the Aksel Schiøtz prize in 2005, in 2006 she received Elisabeth Dons prize and the Prins Henrik prize. In 2011 she was nominated as singer of the year by the Reumert- committee and In 2016 she recieved Holger Bruusgaards prize of honour. In 2013 she was knighted by the queen of Denmark. 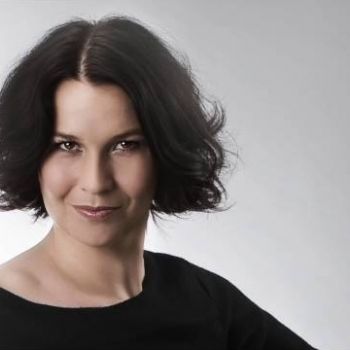